Taylor named Citizen of the Year 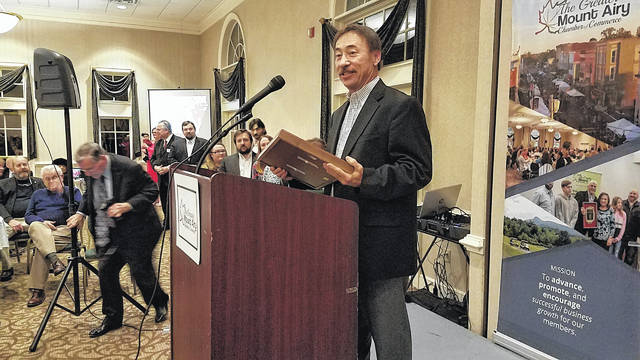 Curtis Taylor was voted Citizen of the Year by the Grand Mount Airy Chamber of Commerce on Thursday night. Here, he takes a few moments to speak to the more than 300 people gathered for the annual reunion on Thursday, as his family and chamber officials gather in the background. – John Peters | News from Mount Airy 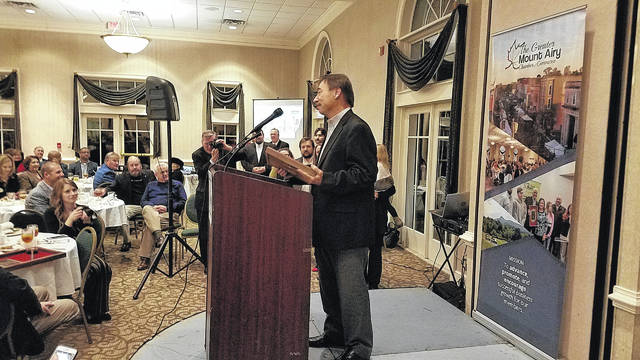 Curtis Taylor smiled at the audience as he took a moment to collect his thoughts just seconds after being named Citizen of the Year by the Grand Mount Airy Chamber of Commerce. – John Peters | News from Mount Airy 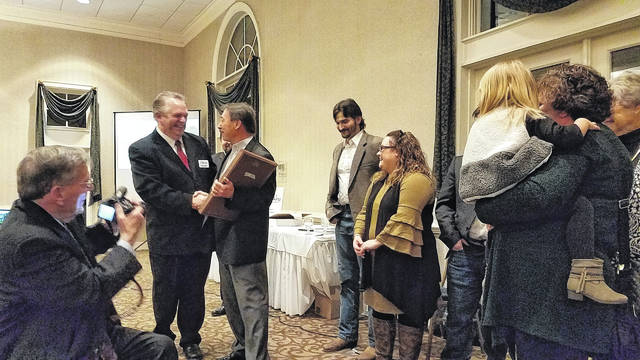 A son from Surry County, who had one of his goals in life to stay in his home county, to spend his life serving the people of his community, was named Citizen of the Year Thursday night by the House Grand Mount Airy Trade Center.

Curtis Taylor, a boy from his hometown who achieved this goal, received the House’s highest honor on Thursday at the organization’s annual meeting. He is the 58th person to have received this honor in a tradition dating back to 1962.

An obviously stunned Taylor didn’t know exactly how to react.

“For those of you who know me, you know I’m never at a loss for words,” he told 300 chamber members and guests gathered at the Cross Creek Country Club Thursday night. “Until tonight.”

While it made the audience laugh, Taylor was obviously taken by surprise, struggling at times to find what to say.

“There are so many people who deserve this,” he said, before saying he felt he was not among them, a conviction clearly not shared by the selection committee who chose Taylor, nor by the audience who gave him a standing ovation when his name was called.

It was more of a surprise for Taylor when he concluded his brief remarks, only to turn around and see his family standing right next to the stage, watching.

“Where do they come from?” he asked with a laugh, before telling House Speaker and CEO Randy Collins, “I was wondering why you wanted me to be here tonight.” He turned to those standing nearby and continued, “He told me to come to dinner in your room, to eat with all of you… I was wondering why he would invite me here.”

Collins said this year has been among the toughest on the selection committee, with more nominees than the chamber has seen for the prize in many years.

“From a young age Curtis Taylor got involved in County Surry,” the chamber said in announcing his selection. “His family was here and he was determined to put down roots here after graduating from Old Dominion University, where he received his bachelor’s degree in civil engineering technology.”

In 1981, he put this degree into practice when he began a 38-year career in telecommunications with Surry Telephone.

“Curtis was never more than an employee of Surry Communications, he was a member too, as were his friends and family. As a result, he always put the individual member first in his decisions and believed in the spirit of cooperation, ”the chamber said.

This commitment has served him well, as Taylor took on additional roles within the company, as Chief Engineer, Plant Manager, CTO and for 10 years before his retirement last year. , General manager.

“Whatever role he served in, Curtis was committed to providing cutting-edge technology to Surry County that would give our schools, medical facilities and businesses the ability to compete with urban communities. He and his retired manager, Mike Stanley, were instrumental in bringing wireless and internet service to the region before others even considered the possibility.

Through his work with Surry Communications, Taylor has assumed leadership roles within his industry. He served on the Transmission Communications Improvement Committee for 20 years; the Carolina Virginia Association for 10 years, the Technology & Innovative Committee for NTCA; and the Carolina West Wireless Board of Directors, as President for three years.

Taylor has also held several positions within the community. He was a member of the Surry County Planning Council for 17 years, where he was honored as Volunteer of the Year; served on the Board of Directors of the Mount Airy Chamber of Commerce for four years, during which time he served as Chairman of the Board for one year and was also Director of Membership of Visions West.

Most recently, he helped Dr. Challie Minton establish the Surry Rural Health Center, located in the former Scenic Outlet location at NC 89 and I-77.

Curtis and his wife Jan have been married for 34 years. They have two daughters, Ashley who is married to Bobby Talbott, both adoptive parents of a 5 month old child; and Allee, who is married to Brad Harris and mother of Mary Rosalie (Rose) Harris. Her mother is Glenda Taylor.

Curtis Taylor was voted Citizen of the Year by the Grand Mount Airy Chamber of Commerce on Thursday night. Here, he takes a few moments to speak to the more than 300 people gathered for the annual reunion on Thursday, as his family and chamber officials gather in the background.

Curtis Taylor smiled at the audience as he took a moment to collect his thoughts just seconds after being named Citizen of the Year by the Grand Mount Airy Chamber of Commerce.

Curtis Taylor, center, holding a plaque, and Grand Mount Airy Chamber of Commerce President and CEO Randy Collins have fun shortly after Taylor was named Citizen of the Year.